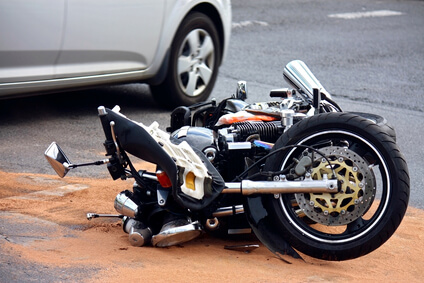 Mar. 11, 2016 Los Angeles - A motorcyclist is dead after crashing into an SUV in Leimert Park while fleeing police. The incident happened just b

Los Angeles – A motorcyclist is dead after crashing into an SUV in Leimert Park while fleeing police.

The incident happened just before 11:00 p.m. when a group of motorcyclists were spotting popping wheelies in the middle of Crenshaw Avenue. When an officer approached, the suspect nearly hit the officer’s car then fled the scene.

Witnesses say the motorcycle was traveling at a high rate of speed and driving on the wrong side of the street.

The motorcyclist ultimately hit a late-modeled SUV head on. The crash was so devastating that the motorcycle was shattered into pieces.

The driver was pronounced dead later at the scene.

The SUV driver did not sustain injuries but was visibly shaken by the events.

The motorcyclist’s friends and family members could be seen hugging and crying as his body was loaded into the coroner’s wagon.

The suspect’s name is not being released pending formal identification by next of kin.

LAPD is still investigating the incident.