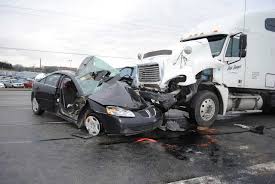 Los Angeles, CA : One person has died as a result of a crash involving a large trash truck and small car in El Sereno on March 23, 2016. According

Los Angeles, CA : One person has died as a result of a crash involving a large trash truck and small car in El Sereno on March 23, 2016.

According to authorities at the scene of the accident, the driver of a compact car lost control of his vehicle and slammed into a large trash truck in Los Angeles. The driver died from injuries sustained from the crash.

The City News Service reports that the driver of the compact car that was killed was 21-year-old Jesus Padilla. Padilla is a resident of Los Angeles and was pronounced dead at the scene of this crash in El Sereno on Wednesday morning.

According to the police on the scene, the driver of the large trash truck did not sustain any injuries as a result of the compact car crashing into him.

The police report that Jesus Padilla was in the process of passing another vehicle when he suddenly lost control of his 1991 Ford Mustang and then swerved into the path of the trash truck in oncoming traffic.

According to a police report, Padilla was driving in excess of 50 mph before the car impacted the trash truck. At the time of the investigation, it was reported that alcohol and drugs were not involved in the crash but the investigation is ongoing says the police.